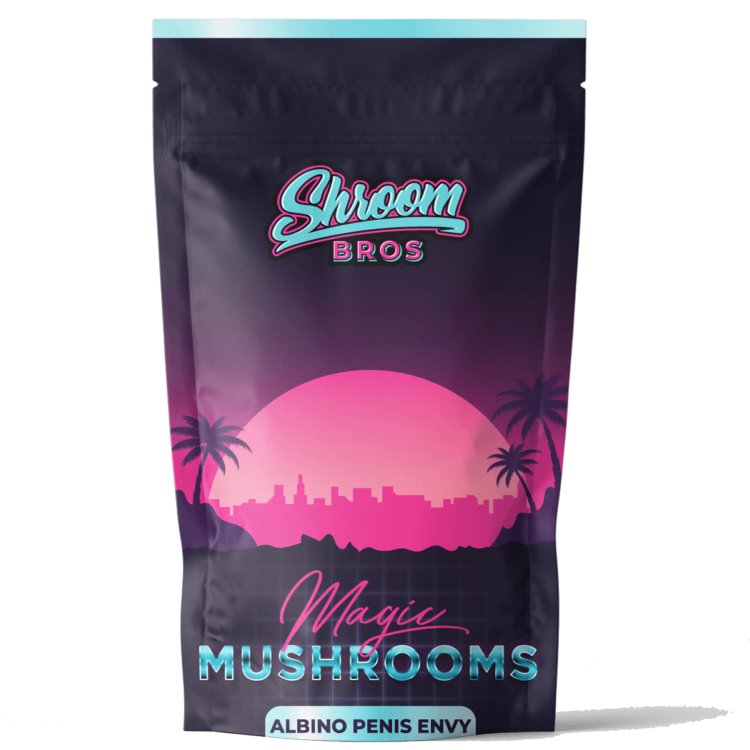 If you’re ready to feel like Alice and take a tumble down the rabbit hole, then Albino Penis Envy magic mushrooms are for you. These incredible mushies are some of the most potent you’ll find anywhere in the world.

Both beginners and experienced psychonauts will need to tread lightly with Albino Penis Envy magic mushrooms. If you’re curious to learn more about Albino Penis Envy shrooms, like what effects to expect, then continue reading below.

Albino Penis Envy (aka APE) magic mushrooms have an exciting past. That’s because it’s a hybrid of two legendary strains—Penis Envy and PF Albino.

Likely, you’ve heard all about Penis Envy magic mushrooms before. After all, they’re one of the most popular P. cubensis strains in the world.

If you don’t know about them, then the short version of the story goes like this. Famous mycologist and psychonaut Terence McKenna found huge P. cubensis growing in the Amazon Rainforest.

He sent them to a friend who cultured them until he found a mutant. That mutant was the biggest of the bunch and much more potent than any other cube strain.

Some madman decided that he would take Penis Envy and then make a hybrid with PF Albino. PF Albino is an albino version of the famous PF strain.

The thing is, PF Albino is an already incredibly potent strain itself. So you can only imagine just how robust Albino Penis Envy really is.

Albino Penis Envy magic mushrooms look unique, to say the least. When growing, they look a bit phallic. That’s because they have tiny caps and super thick stems.

The other thing about APE is that they grow shorter than regular Penis Envy magic mushrooms.

One thing you might notice about your batch of Albino Penis Envy is a bluish tint on some of the mushrooms. However, the bluing is totally natural and happens when the mushrooms get bruised.

That can happen from storage, transport, or even right after harvest. So don’t panic if you see some blue—it doesn’t affect the quality or potency of the mushies whatsoever.

Get ready for the most exciting and colorful visuals you’ve ever experienced. Albino Penis Envy magic mushrooms deliver a seriously visual high.

Not only that, but APE also has a well-rounded body high that will make you feel like you’re sitting on clouds. Remember, these magic mushrooms are seriously strong, so get ready for some introspection.

If you’re looking for a recreational experience with APE magic mushrooms, then you’ll need to be careful. Since these mushrooms are so robust, you’ll need to take way less than what you’re used to.

As long as you and those around you dose carefully, then you’re in for an incredible time. Pure euphoria will whisk you up as you feel totally connected to everything around you.

After a little while, you’ll likely fall into some deep introspection. However, you’ll probably also feel intense visuals kick in even on low doses, so be prepared for it.

Remember to be responsible, especially when taking APE magic mushrooms. Make sure you only take some after reaching your destination and never drive or operate heavy machinery on them.

Also, remember to stay safe by being equipped with food, water, and good vibes. The high can last up to 6 hours or more, so plan accordingly.

If you’re ready to go to outer space, then Albino Penis Envy magic mushrooms will bring you there. The best part is, you probably won’t need to take a super high dose to get there.

However, if you really want to get the most spiritual experience possible, then you’ll need to plan your trip. Remember, a spiritual or mystical journey is one that shouldn’t be taken lightly.

So you’ll need to keep a key concept in mind called set and setting. Set and setting was thought up decades ago by psychedelic pioneers like Timothy Leary.

Basically, the set is your mindset, and the setting is your environment. So you need to think about your internal and external environments.

That means you need to think about your current state of mind. Ask yourself—am I in the right mental state to go on a journey to the furthest depths of my mind?

Then you’ll need to consider your setting or the place you want to trip at. It can be anywhere, but ideally, it should be somewhere comfortable, familiar, and safe.

Other people are also part of the setting. For spiritual journeys, you’ll want the least amount of people possible—to keep you from getting distracted.

However, you’ll want at least one person to act as a trip sitter. The trip sitter can watch over you to make sure you’re safe and can help you get out of a negative thought loop.

Once you’ve made adequate preparation, you’ll be ready for an intense trip on Albino Penis Envy magic mushrooms.

As we’ve said multiple times, you’ll need to take it really easy with Albino Penis Envy shrooms. Even experienced magic mushroom enthusiasts are caught off guard with just how potent these shrooms can be.

If you’re a beginner, then you’ll do well to start extremely low and go very slow. If you’ve never dosed magic mushrooms before, then here’s a standard guideline:

Beginners will want to take a gram and under. Experienced users will probably want to start with a gram and then go from there.

However, if you take too much and end up in space, don’t say we didn’t warn you.

Reach for the Stars

Here at Shroom Bros, we have a passion for growing and sharing the very best magic mushrooms in the world. That’s why we always keep a stock of Albino Penis Envy Magic mushrooms ready to go.

If you’re ready to reach for the stars, then you can’t go wrong with Albino Penis Envy magic mushrooms.