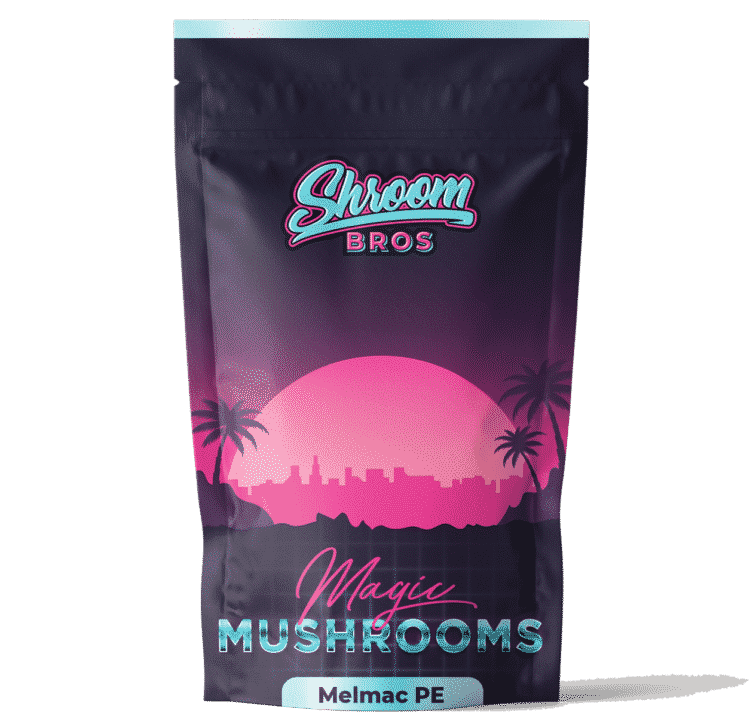 If you’re looking for incredibly potent and unique magic mushrooms, then look no further than Melmac Penis Envy magic mushrooms. These mushies will elevate you to levels you never thought possible.

Intense visuals and incredible euphoria will greet you if you’re brave enough to try these fantastic magic mushrooms. Continue reading below to find out everything you need to know about Melmac Penis Envy Magic Mushrooms.

Melmac Mushrooms are a variant of the magic mushroom Penis Envy Strain. It is know for potent visuals and highs when consumed even in small amounts!

Likely, you’ve heard of Penis Envy, but what about Melmac Penis Envy? What makes Melmac different from the all-time classic Penis Envy strain?

For starters, we need to know a little bit about the legendary Penis Envy. Penis Envy was first discovered by famous tripper Terrence McKenna deep in the Amazon Rainforest.

He sent samples back home, which were cultured again and again. Finally, a mutation occurred, which resulted in a giant mushroom that looked well-endowed.

From then on, the Penis Envy strain that we know and love started circulating among psychonauts. Then, a company called Homestead located in the Pacific NorthWest began experimenting with Penis Envy magic mushrooms.

After many cultures, Homestead produced a monstrous mutation that they decided to call Melmac penis Envy. The company sold prints of this mutation throughout the 80s before disappearing into oblivion.

The appearance of Melmac Penis Envy is totally unique. For starters, this strain is much larger than regular Penis Envy magic mushrooms.

However, its most incredible feature is its alien-looking cap. The cap is folded again and again at the edges, making it look pleated.

Due to storage and after harvest, Melmac PE mushrooms can become bruised and bluish. However, there’s nothing to worry about because bluing is totally natural and doesn’t lower the quality or potency of the magic mushrooms.

Melmac Penis Envy is different from other strains of P. cubensis because of its incredible potency. Penis Envy magic mushrooms are already known as heavyweight shrooms, but Melmac PE takes it to another level.

Melmac PE provides intense visual stimulation that can’t be found with other strains. On top of that, this strain produces deep euphoria and pure wonder.

If you’re looking to use Monster Penis Envy magic mushrooms for recreation, you’ll need to be careful. Since this strain is so potent, it’s easy to overdo it.

Make sure that you have a scale so that you can accurately measure out doses. On top of that, it may be a good idea to blend and mix your Melmac Magic Mushrooms.

That’s because the psilocybin concentration can be different from mushroom to mushroom and between the cap and stem.

As long as you dose very lightly, you’ll be sure to have a wonderful time on Melmac Penis Envy magic mushrooms. Just be sure to have access to necessary tripping supplies like water, food, and music.

Also, never take Melmac PE mushrooms until after you reach your destination. Remember, driving and tripping don’t mix, so don’t do it.

Melmac Penis Envy magic mushrooms are made for people who want to go on an intense introspective journey. It doesn’t take too large of a dose of Melmac PE to bring you into the furthest reaches of consciousness.

Set means your mindset or your set intentions. Are you going into this for a particular reason, or are you just curious?

Are you in a good mental state, or are you trying to escape or ‘cure’ something?

These are all questions you need to ask yourself before embarking on a spiritual trip. Equally important is preparing a good setting.

The setting is where you’re going to trip and who with. For a spiritual journey, it’s recommended that you’re in a totally comfortable space.

That space can be somewhere out in nature or in your own home. You’ll also need a trip sitter or someone to look after you during your journey.

The trip sitter is part of the setting, and it should be someone you trust and hopefully someone who has experience with psychedelics. The trip sitter not only looks after you but can help bring you out of a challenging experience.

Remember, there are only challenging trips, not bad ones. Once you’ve thoroughly planned your trip, you’ll be ready for take-off with Melmac Penis Envy Magic Mushrooms.

We’ve talked a lot about dosing, but how are you supposed to dose Melmac Penis Envy mushies? The answer is—very carefully.

Remember, these mushrooms contain way more psilocybin than other P. cubensis strains. If you have some experience with cubes, then think of your normal dose and start way lower.

If you’ve never dosed out magic mushrooms before, then here’s a handy guide you can follow:

Remember that Melmac Penis Envy magic mushrooms are super potent, so always start lower. In fact, you’ll probably want to start with half or less just to be on the safe side.

Here at Shroom Bros, we’re proud to say that Melmac Penis Envy are some of the most potent magic mushrooms that you can buy in Canada. We’re committed to seeking out and growing incredible magic mushroom genetics for our customers.

We think we’ve struck gold with Melmac Penis Envy, and you should definitely try them before they’re sold out. Just be sure to dose it properly, and you’ll be in for the trip of a lifetime.